I cant find owners manual and diagram for my hot tub barefoot spas 77LP. I’ve looked everywhere! Im getting it delivered next week and need to know how to hook up the wiring. I am not getting off to a good start here!

The barefoot spas 7NP is good spa. We have it 2 years. It well built and good to use when before sleep and after the work. If I choose one thing as complaint I change the cover we use is not as good quality as old tub was. but we like the barefoot very much and love the seats and the not use of maintenance to take good care of it.

We found Barefoot spas by going to a store down the street from our house in Clearwater Florida. We looked at several different spas and found the Barefoot 88NP to be the best of what we saw for the price. we got to see it running with water in it, and compared it to others there at the store. So glad we did that becuase this one really has the power we want and need. The pumps are 5hp each x3! Really gets the water moving. Very happy with the spa.

I recently purchased a 77LP from Barefoot Spas. I wanted to write a review because my experience was mostly good. We did have a small problem with the delivery of the 7 foot wide hot tub to my deck in my backyard, but they got it resolved quickly. It wasn’t really an issue. The team that delivered it was able to figure it out without having to remove the deck railing. At first, they asked me to remove it, but I have no idea how to do that. To my surprise, they said “no problem”, and like I said, they figured out another way to make it happen. They actually tilted the hot tub up on its side to better maneuver the hot tub up the steps. I was very impressed, and they made this process look easy.

I told them I considered buying a hot tub online, and they laughed. I can see why now. They said when you buy online, they ship it to you, and they drop it at the end of your driveway. I don’t know how I would’ve moved it all that way myself. My neighbors would’ve seen it sitting there for days, maybe forever!!

My only complaint about the whole process was is it did take them a bit longer than they said it would to actually get the hot tub exactly where I wanted it. They were here for almost 3 hours, but I don’t care because “I would rather have a job done right the first time.” Those were actually his exact words 🙂

Now that I’ve used the hot tub a few times, I can tell you that it is of course AMAZING, and the delivery was, as you can tell, on point, and handled professionally as promised.

I have owned a 77NP for two years. I love it. I live in MA and I’ve walked out side with sub below 0° temperature with a foot of snow on top of the tub. Wipe the snow off and open it up and the tub was 104° and felt so relaxing being able to warm up quickly. 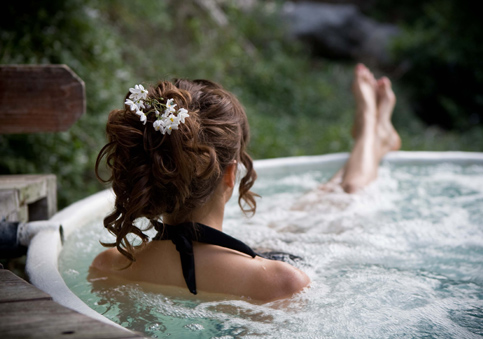